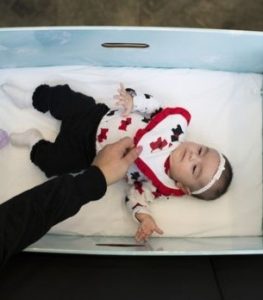 USA Today reports that some medical professionals are skeptical about the much-hyped baby box program.

In Finland, every expectant mother receiving a prenatal checkup can get a box filled with baby necessities such as blankets and clothing free of charge. It began back in the 1930s, when almost one out of every 10 Finnish children died within their first year. Today, Finland has one of the lowest infant mortality rates in the world, a shift many link to the box.

The Baby Box Co. says it was “born from” this tradition, but it plays out differently in the U.S.: Parents complete a video-based course about safe sleep on Baby Box’s site before receiving their box in the mail or picking it up directly. It comes with diapers, wipes and a onesie. A sturdy mattress for sleeping. And while the box-as-bassinet concept plays prominently into Baby Box Co.’s marketing, it’s more of an afterthought in Finland.

“They’re saying this is just like the Finnish baby box. Well, yes, but actually no,” said Moon, the pediatrician. “The box may be the same, but they’re doing it in a totally different way.”

Get the whole story at www.usatoday.com